I was diagnosed with ulcerative colitis (UC) in 2007 when I was pregnant with Ella.  It was a tough pregnancy, an easy delivery and an impossible recovery.  Ten days after giving birth I was admitted to the hospital with a major UC flare.  As a new mom and someone who had never even broken a bone, a week-long hospital stay was scary.  They pumped me full of drugs to try to tame the flare and sent me on my way.  I spent the next 2 years in and out of hospitals, experimenting with many different drugs and diets, losing way too much weight, getting to know every bathroom west of the Mississippi (and some to the east) quite well, and just trying to survive.  Nothing worked, so in 2009 we decided to remove my colon.  A couple weeks after the first surgery, I was admitted with an intestinal blockage and after definitely the worst night of my life and one emergency surgery later my gut was flowing in the right direction again.  I recovered from my surgeries and was lucky enough to spend the next 7 or so years with relatively few issues.  It was during this time that I was able to have Louisa, feel “normal” and I signed up for my first Team Challenge event.  After being so, so sick, my philosophy was, “if I can do a half-marathon, I am truly healthy!”  So, being someone who hates running, I figured I’d do my one half-marathon and call it “good.”  Well, here I am...very much not done...just completed my 6th Team Challenge event. Apparently I can hate running and still keep running (and walking) these things!

About 3 years ago I began having issues with chronic pouchitis.  After removing my colon, the surgeon created what is called a J-pouch using part of my small intestines.  This pouch acts as a mini-colon to hold stool and allow me to avoid an ileostomy (like a colostomy) bag.  Since the small intestines are being used for something they were not intended for, it isn’t uncommon to have bouts of pouchitis that can be cleared up with some antibiotics.  After a few years of being on daily antibiotics, it was clear that this wasn’t working and there might be something else going on.  When we moved to San Diego last year, I started seeing one of the leading doctors in the field of IBD.  He did a scope and ran a bunch of tests.  He diagnosed me at the time with Crohn’s of the pouch, telling me that it could likely be the same pathway as my UC and that it was now just attacking my pouch.  What this meant was going back on the heavy-duty drugs that I thought I was done with.  I began those drugs…had some bad reactions to one of them…switched it to another one…and have been “happily” taking my shots and pills for 8 months.

Here’s the really crappy part…during my most recent scope, he found inflammation, narrowing and ulcerations in my small intestines above the pouch and diagnosed me with Crohn’s disease.  UGH!!  NO!!  What do I do?!  Apparently I sign up for another Team Challenge event, that’s what I do!

They call it the Team Challenge Family for a reason...it is so much more than the race. We are a community who supports each other, and is determined to find cures. But, my family has taken that saying quite literally. My mom, Rosemary has done 3 half marathons with Team Challenge, my husband Bo and sister Kelly have both done one, and my 10 year old Ella just finished her fifth 5k to fight IBD. The entire family works together to raise funds...because this disease doesn't just affect me, it affects our entire family. Every year Ella has asked for donations instead of birthday presents. She has raised well over $3,000 all on her own and continues to blow me away with her generosity and her spirit.

Team Challenge and the Crohn’s and Colitis Foundation have been the one positive light in all of the darkness that is IBD.  I have met incredible people who have been through much worse than I have, and give me perspective.  I have become stronger and more confident and more of my own person.  I have been reminded how insanely lucky I am to have the family I have! I have completed 6 half-marathons!  WHAT?!?!  And finally, I have been reminded how truly wonderful the people I know are. I have received donations and support from a deep pool of friends, family, coworkers, friends of family and family of friends.  This outpouring of support truly is one of the most amazing things I’ve experienced. 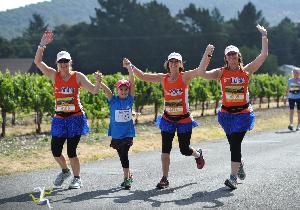 Like Melissa and her family, YOU can help us get closer to cures! Fill out the form below to have one of our team contact you, walk you through the options, and help you take the first step. Come meet our team & try us out with nothing to lose!